As a passionate dog owner and former vet tech, I totally understand the mental commitment it takes to raise a well-behaved and healthy dog.

Along the way, you will likely come to a point where you are considering if you should sterilize your pet Husky.

I want to help you navigate this important decision and ensure that your husky is happy and healthy, and in this article, I will point out the pros and cons of neutering a husky along with some useful tips for you.

What Happens When You Neuter a Husky?

For context, I am referring to the surgical removal of a male dog’s testicles which stops sperm production and have these glands stop producing hormones.

In a slightly crude way, some people will call it castration for male dogs.

This operation is carried out by a veterinarian and although it is often advised that the procedure be performed as early as 8 weeks of age, a study has revealed that this is not always the case (I’ll touch on this later).

After the procedure, the dog will be given painkillers to help manage any pain before being discharged to recover at home.

The healing process often takes a week to ten days, and during this time, your dog must remain calm and refrain from any vigorous activities.

A dog will no longer be able to reproduce and will also have lower levels of testosterone which may have an impact on its behavior and physical well-being.

If we are talking about rescues, the answer is straightforward.

Simply put, there won’t be enough resources to help care for them as a result of unintentional breeding and unchecked population growth, which will eventually result in them being put down.

But there are a few good reasons for normal dog owners to do so too.

Numerous studies have shown that neutering improves a dog’s health by lowering the likelihood that the dog may develop testicular or prostate cancer.

Inappropriate behaviors in dogs caused by sexual frustration, such as mounting and humping, can also be corrected with neutering.

I will discuss more on this in the pros and cons section later on.

Are Siberian Huskies Calmer After Being Neutered?

It is a common misconception that neutering a dog will lead to a change in its personality and make them more docile, and this is a myth that needs to be debunked.

The reality is that neutering a dog does not alter its brain or overall personality.

Rather, it results in a decrease in testosterone levels, which can lead to changes in certain behaviors such as mounting, humping, marking territory, and wandering.

You should know that neutering does not necessarily make a dog less active or less energetic at all and that is something unpredictable.

Not to worry though as extreme changes are incredibly rare.

Advantages of Neutering a Husky

I know some folks might think neutering your dog is harsh, but hear me out.

If you’re not planning on breeding your pup, neutering is just a responsible thing to do as a dog parent.

Not only that, there are some pretty great benefits that come with it, most of them being related to your dog’s health.

Let me break it down for you:

Neutered dogs have a significantly reduced risk of developing testicular and prostate cancer, which are prevalent in older dogs.

Additionally, getting the op done has also been linked to a lower incidence of urinary tract infections, yet another common condition that affects nearly a quarter of the dog population.

Behaviorally, neutering can also have a positive impact.

Neutered dogs are less likely to roam and engage in aggressive behavior towards other male dogs while competing for a mate.

This, in turn, reduces the risk of fights over territory and mating-related injuries.

It reduces the risk of exposure to contagious diseases that are commonly spread during mating season, such as canine herpes.

A dog that has been “fixed” always shows a decrease in territorial marking behaviors, resulting in a lower likelihood of accidental urination within the household.

Furthermore, neutering can also have a positive impact on a dog’s behavior as they mature.

Studies have shown that neutered dogs are less aggressive and less likely to bite.

They also exhibit fewer instances of problematic behaviors such as humping.

And equally important is the fact that there will no longer be a potential for unwanted pregnancies.

These health and behavioral benefits underscore the importance of neutering as a responsible and beneficial choice for dog ownership.

Disadvantages of Neutering a Husky

Before making a final decision, you should carefully weigh the disadvantages of neutering your Aussie too.

Neutering large breed dogs at a young age (before one year) can increase the risk of certain joint issues such as hip dysplasia, elbow dysplasia, and cranial cruciate ligament injuries.

It’s also important to remember that neutering does not always ensure a behavior change.

In some cases, dogs may actually turn aggressive after the procedure, but this behavior is mostly temporary and can be resolved with the help of a dog trainer.

Additionally, some dog owners have reported changes in coat texture as a result of hormonal changes from neutering, particularly in spaniel breeds like the Cocker Spaniel, where the coat may become fluffier. However, this is a rare occurrence.

Finally, you must consider that neutering is a permanent and irreversible process, and it prevents the ability to breed your dog forever.

For those who wish to preserve the lineage of their purebred Siberian Husky neutering should be carefully considered before making a decision.

What is the Best Age to Neuter a Siberian Husky?

If there’s only one thing you should take away from this post, it’s this.

There is a lot of misinformation on the internet about the best age to neuter your dog. Most frequently, it is suggested that you should do it when your puppy is between the age of 6 months and 1 year.

A study discovered that this is not always the case and should be looked at on a breed-to-breed basis.

Unfortunately, the study did not include Siberian Huskies but based on anecdotal evidence, I would recommend that you neuter your dog between 1 and 2 years old.

What Are the Risks Involved in Neutering Your Siberian Husky?

Although neutering your dog is a very common procedure and is thought to be quite a low risk one, that does not mean there is absolutely no risk.

Here are the risks you should be aware of:

Reading this will surely cause some stress, but don’t worry, there are quite uncommon these days, especially since this surgery is so commonly performed.

Doggy says, you might be interested in this too: Pros and Cons of Neutering an Australian Shepherd dog

Care and Recovery After Neutering Your Husky

Just to give you a heads up on what to expect after neutering your pup.

It usually takes around 2 weeks for them to fully recover, but some may take a little longer.

Keep an eye on your dog’s health and let your vet know if you notice any unusual symptoms or changes.

During this time, your dog will need plenty of fluids and rest and you might notice some strange behavior like them sitting a lot after being neutered, or if it’s a female, trying to scratch their spay incision with their hind legs.

Your vet will probably give you a painkiller for your dog to take after the surgery, and also be careful not to let them jump or play too vigorously during this recovery period.

Please also get your dog an e-collar to prevent it from licking or biting at the surgical incision site.

Should You Neuter Your Husky?

It goes without saying that if you plan to breed your Husky, this is not an option.

I know people have different opinions on this topic and both sides have valid points.

Doggy says, you might be interested in this too: Pros and Cons of Neutering a Bernese Mountain Dog

In Conclusion: Pros and Cons of Neutering a Siberian Husky

It can be difficult for you to decide whether to neuter your dog, but if you do, stick with it.

Before you go ahead, make sure you are doing it for the correct reasons by assessing the benefits and drawbacks of the procedure.

If you’ve determined that having your dog neutered is the best course of action, get ready for the process, learn about all the dangers, and make sure your dog comes home with lots of affection.

Check out other dog care articles such as potty training regression after neutering, why does your puppy hold pee all night but not during the day, how to remove sticky bandage from a dog, and many more on our blog! 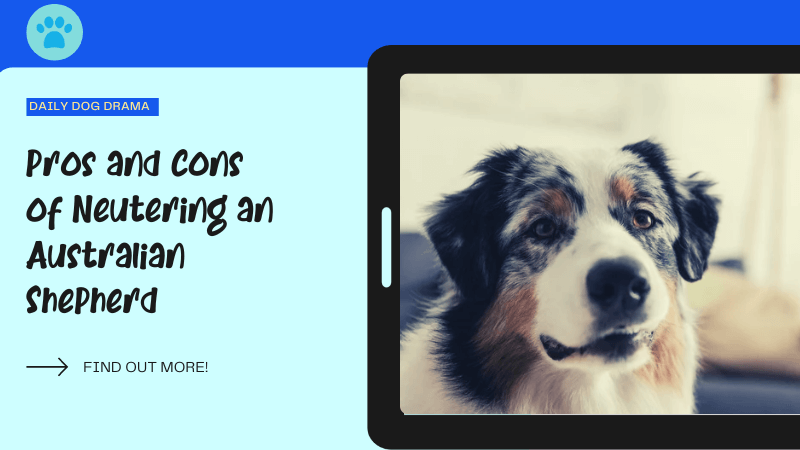